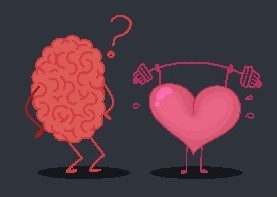 Imagine… back in the 18th century…

The reaction to the intellectualism and the rationalism of the ‘Age of Enlightenment’ (1650-1780), when men questioned the traditional line of authority (ending in the French Revolution) and especially the Catholic Church, and put reason, analysis, science and scepticism above everything else…

And the conformism and materialism of the ‘Industrial Revolution’, considered by artists inhumane and unnatural, making workers slaves of machinery.

… This led to the birth of the ‘Sturm und Drang’ movement, leading to the Romanticism…

The structured form and predictability of the Enlightenment was seen as constraining and limiting.

The rise of materialism and the conformity of the ‘Industrial Revolution’ might lead to the potential danger of silencing people’s voices.

The need to return, both in life and in spirit, to the emotional and natural was felt to be the only way forward by the intellectuals of the time.

The urge to express individual subjectivity, authenticity and extremes of emotions became the new purpose of art.

Given that the development of Romanticism in the course of the 19th century and in different countries had different expressions, the common denominator was the central role of the artist’s emotion. He, almost like a prophet, enriches humanity by his art.

Artists want to raise emotional awareness and desire to trigger the imagination of their audience.

They are fascinated by the unusual and fabulous, the strange and surprising. These subjects give both the artist and the listener more freedom. The artist can simply hint and the listener has more space to provide his/her own interpretation.

Taking emotions to the extreme

It was almost inevitable that the idealism of the Romanticism ended up conflicting with reality. One of the results of this conflict was Weltschmerz, the pain of the romantic hero who, longing for beauty, innocence and the perfect love, understands that physical reality can never satisfy the demands of the soul.

With so much longing, pain and anguish, peace can only be found in the beauty and purity of nature…

…and when that cannot fulfil the purpose anymore, the need to escape leads to other means: drugs, dreams, the occult, but also literary – leaving this world.

Well… extremes are seldom the way out… but I can definitely vouch for the spirit of the Romantics: Impulse, Imagination and Improvisation… as far as emotions are expressed.